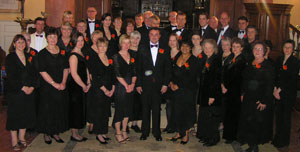 From time to time our concerts are attended by reporters and critics.

Below are just some of the comments made about the choir and our concerts.

“Last month’s first performance from the West Wycombe Chamber Choir was a great success. raising £900 to share between the St Lawrence’s Church and Library causes. Ticket sales had gone very well and a packed church of 140 people attended. The Choir has been going a little over 4 months and this has been a great achievement. Here’s looking forward to more in the future.”

The first Christmas concert  – December 2006 – saw the choir embarking on several seasonal favourites as well as Christmas music from Handel, Bach and Brahms.

Our special guests at the Spring 2007 concert were the High Wycombe Sea Cadet Marching Band. Our choir performed some traditional Easter Anthems, Negro Spirituals and some Pop music.

In Summer 2007 the choir presented an evening of songs from the musicals with special guests Kate John and Robert Bristow. The evening ended with a Mamma Mia medley arranged by Sarah Hodkinson.

At Christmas 2007 the choir were joined by the choir of the West Wycombe Combined School. Our conductor Barry Hodkinson voluntarily worked in the school in forming the choir for this concert.

The Spring concert 2008 stretched the choir in successfully performing Ave Verum (Mozart), Locus Iste (Bruckner) and Cantique de Jean Racine (Fauré) amongst the repertoire, ending with Wind Beneath my Wings and You Raise Me Up – which has by now become the choir’s anthem.

Summer 2008 was a nostalgic look back at the fifties where the choir also had their first taste of being accompanied by a band.

For Easter 2009 the choir once again raised the bar and performed Fauré’s Requiem which was well received by everyone present, and the challenging music was greatly enjoyed by the choir.